skip to main | skip to sidebar

The Republican convention is over and the Democratic convention is happening this week. And the talk has turned to lying. Paul Ryan's speech last week at the RNC was just loaded up with lies. And there is no way he did not know it. He accused the president of being the cause for a plant shut down when the plant closed BEFORE the president took office (during GWB's tenure). And now he is trying to claim that (President) Obama makes (President) Carter looks like the ‘good old days.’ And doing it by lying. And that, my friends, is the difference between lying and mendacity. The lies are part of the campaign strategy and the facts be damned. Neil Newhouse, a Romney pollster said, and I quote: "Fact checkers come to this with their own sets of thoughts and beliefs, and we’re not going to let our campaign be dictated by fact checkers.” Or facts, evidently. We all know politicians lie. We don't like it, but it probably is not going to change. But the Republicans have turned lying into an art form. They boldly lie and do not care whether they are called out for the lies or not. Because they know that their base does not care whether it is the truth or not. They just want it to feel good. The error I think they are making is that moderate, undecided voters do care. I think much of it probably stems from Romney's who-cares-what-I-have-to-say attitude... he'll say anything at all to get elected. Anything. Mitt Romney has basically changed his position on every issue since he was governor of Massachusetts. Is he even the same person? Watch the campaign ad put together by John McCain in the 2008 election for Romney changing positions in his own words! The scary thing is, that at least as of today (9/5/2012), most polls show the election being close. There must still be a lot of rampant stupidity, jingoism, and racism in this country for that to be the case.
Posted by csm at 5:03 PM 3 comments

Ronald Reagan Could Not Win the Republican Nomination in 2012 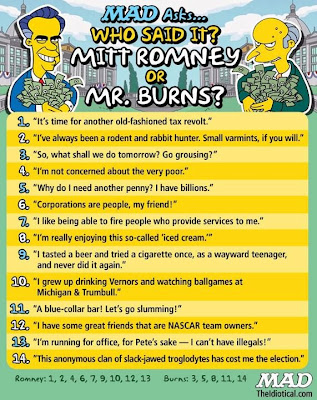 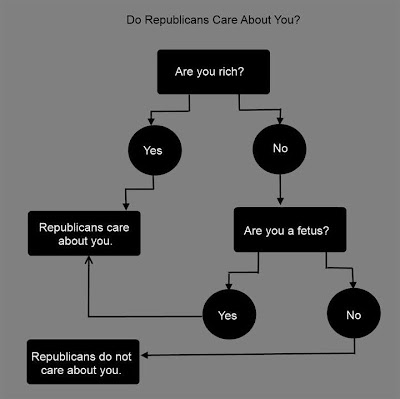 Some Questions for Rick Santorum

To: Rick Santorum
Thank you for doing so much to educate people regarding God's Law. I have learned a great deal from you, and I try to share that knowledge with as many people as I can. When someone tries to defend the homosexual lifestyle, for example, I simply remind him that Leviticus 16:22 clearly states it is to be an abomination. End of debate.
I do need some advice from you, however, regarding some of the specific laws and how to best follow them.

a) When I burn a bull on the altar as a sacrifice, I know it creates a pleasing odor for the Lord (Lev 1:9). The problem is my neighbors. They claim the odor is not pleasing to them. Should I smite them?

b) I would like to sell my daughter into slavery, as sanctioned in Exodus 21:7. In this day and age, what do you think would be a fair price for her?

c) I know that I am allowed no contact with a woman while she is in her period of menstrual uncleanliness (Lev 15:19-24). The problem is, how do I tell? I have tried asking, but most women take offense.

d) Lev. 25:44 states that I may indeed possess slaves, both male and female, provided they are purchased from neighboring nations. A friend of mine claims that this applies to Mexicans, but not Canadians. Can you clarify? Why can't I own Canadians?

e) I have a neighbor who insists on working on the Sabbath. Exodus 35:2 clearly states he should be put to death. Am I morally obligated to kill him myself?

f) A friend of mine feels that even though eating shellfish is an abomination (Lev 11:10), it is a lesser abomination than homosexuality. I don't agree. Can you settle this?

g) Lev 21:20 states that I may not approach the altar of God if I have a defect in my sight. I have to admit that I wear reading glasses. Does my vision have to be 20/20, or is there some wiggle room here?

h) Most of my male friends get their hair trimmed, including the hair around their temples, even though this is expressly forbidden by Lev 19:27. How should they die?

i) I know from Lev 11:6-8 that touching the skin of a dead pig makes me unclean, but may I still play football if I wear gloves?

j) My uncle has a farm. He violates Lev 19: 19 by planting two different crops in the same field, as does his wife by wearing garments made of two different kinds of thread (cotton/polyester blend). He also tends to curse and blaspheme a lot. Is it realty necessary that we go to all the trouble of getting the whole town together to stone them? (Lev 24: 10-16) Couldn't we just burn them to death at a private family affair like we do with people who sleep with their in- laws? (Lev. 20:14)

I know you have studied these things extensively, so I am confident you can help. Thank you again for reminding us that God's word is eternal and unchanging.
Sincerely,
Your devoted fan.
Posted by csm at 3:19 PM 2 comments 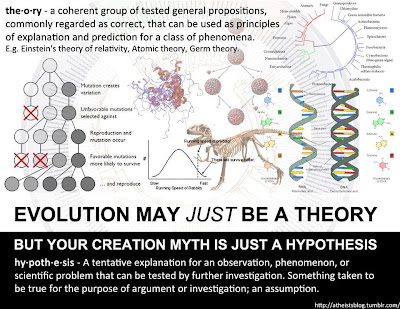 Actually, it isn't even a hypothesis because it cannot be proven or disproven by testing...
Posted by csm at 9:56 AM 0 comments

Rick Santorum, somehow now a leading candidate for the Republican nomination, is a hypocritical shitbag of the highest order. Watch this video first.
Now, of course, if you have been following the parade of idiots clamoring for the Republican nod, this statement of Santorum's against all abortions even in the case of rape and incest is probably not surprising.
But, did you know his wife had an abortion?

In October, 1996, his wife Karen had a second trimester abortion. They don’t like to describe it that way. In his 2004 interview with Terry Gross, Santorum characterizes the fetus, who must be treated as an autonomous person, as a practically a gunslinging threat, whom the mother must murder in self-defense. Karen has had to justify her decision to save her own life by explaining that if she died her other children would have lost a mother.

This hairball is the second worst (Michelle Bachmann ranks number one) of the fools running on the Republican side... and his ascent needs to be slapped down hard and fast. I'd rather Newt win than this troglodyte (which is saying something, because I despise Gingrich, too).

I enjoyed reading through this list of quotes about conservatives and Republicans (although the two are NOT synonymous).
Posted by csm at 12:08 AM 3 comments